(GVO) – Violence between an insurgent group and Myanmar’s security forces during the last week of August 2017 drove thousands of Rohingya Muslims to enter Bangladesh in search of refuge.

The surge led Bangladesh to begin to restrict crossings, meaning many others were turned away and left to wait on the border.

Members of Arakan Rohingya Salvation Army (ARSA) staged a major coordinated attack on around 30 police posts and an army base in Rakhine state, Myanmar. Around 1,000 militants took part in the offensive in the Maungdaw and Buthidaung townships. The military retaliated and at least 59 insurgents and 12 members of the security forces were killed on August 25, 2017 alone.

Fighting between the two sides continued for days. Myanmar’s armed forces raided villages and torched houses, claiming their actions were part of the fight against the insurgency group. The Myanmar government evacuated at least 4,000 non-Muslim villagers, and many Rohingyas fled on their own. 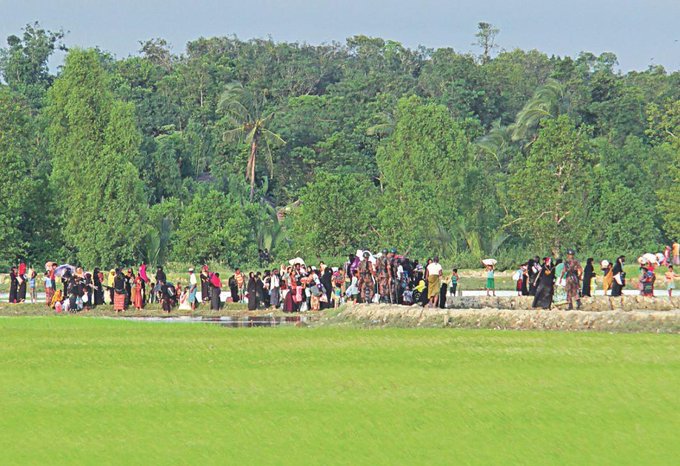 Over a thousand #Rohingya crossed the border into #Bangladeshafter #MyanmarArmy launched atrocious campaign against the civilians.

The violence threatens the already precarious situation of the Rohingyas in Myanmar. The government of Buddhist-majority Myanmar doesn’t recognize the Rohingya people as among the country’s ethnic groups and denies them citizenship. Authorities and Buddhist nationalists consider them to be illegal immigrants from Bangladesh, even though the Rohingyas have roots in the Rakhine state that go back centuries.

Rohingyas are often subjected to racial and religious slurs, including being called “Bengalis.” It’s for these reasons they are often described as the “most persecuted minority group in Asia.”

After the recent round of fighting broke out, thousands of Rohingya fled their villages and gathered near the Bangladesh border as gun shots could be heard from the Myanmar side. A Rohingya Facebook page claimed that the Myanmar military conducted air attacks in northern Maungdaw, shooting villagers from helicopters. Videos were circulated on social media showing villages burning, Rohingya refugees fleeing and dead bodies on the river.

Myanmar citizens also expressed concern for Rakhine’s ethnic majority who were exposed to the violence. However, some took it a step further and blamed the entire Rohingya community for the attacks against the security outposts.

Nobel Laureate Aung San Suu Kyi, who is the State Counsellor of Myanmar and whose party is now the head of Myanmar’s government, has attracted criticism for failing to stop the persecution of the Rohingya.

She, in turn, has accused international aid workers of helping the violent militants. According to reports, Suu Kyi’s administration is trying to restrict access to Rakhine for aid groups and the media while publicly discrediting them. Several aid workers have been seen leaving the area already.

Phil Robertson, the deputy Asia director at Human Rights Watch, condemned on Twitter the statement of against aid groups:

Profoundly irresponsible for Aung San Suu Kyi to accuse int’l #NGOs of involvement in “terrorist” attacks in #Rakhine without any evidence!

Bangladesh remains the only country which has repeatedly agreed to allow Rohingya refugees inside its borders. The refugees are sheltered in temporary camps and are surviving with the help of aid and donations from authorities and the local people. The World Food Programme and other local NGOs have pledged food and emergency medical aid support.

But on August 26, Bangladesh declared that they will not allow any more refugees from Myanmar, citing that the country already hosts about 400,000 Rohingyas. The government maintains that as Bangladesh is overpopulated with little or no form of social security for its own citizens, it simply is not in the position to host refugees indefinitely. It added that the influx of refugees has already caused “massive” social, economic and environmental problems.

The Bangladesh government started to push back hundreds of Rohingyas into Myanmar, putting them further in danger.

Faruk Wasif, a journalist with the Bangla daily Prothom Alo, appealed for a comprehensive solution to the problem instead of simply blaming the victims:

Whether it’s the Rohingya or the indigenous group, we should not blame the victims and instead look at the root of the problem. In Myanmar democracy is still elusive, extreme racist nationalism persists. This is creating bad news at the borders.

← Afghans Fear US Army, NATO Operations More Than the Taliban
Weekend Of Failure: Trump Regime Snubs Partners He Needs Most →

END_OF_DOCUMENT_TOKEN_TO_BE_REPLACED

This website uses cookies to improve your experience. We'll assume you're ok with this, but you can opt-out if you wish.Accept Reject Read More
Privacy & Cookies Policy
Necessary Always Enabled
The Fifth Column is a participant in the Amazon Services LLC Associates Program, an affiliate advertising program designed to provide a means for sites to earn advertising fees by advertising and linking to Amazon.com.