With those words, the Civic Council of Popular and Indigenous Organizations of Honduras (Consejo Cívico de Organizaciones Populares e Indígenas de Honduras, or COPINH) concluded their statement on their blog about the murder of community leader Lesbia Yaneth Urquía in Honduras on July 7. Her body was found in a garbage dump; she reportedly had suffered injuries to the head.

Her death was nationally and internationally condemned as yet another blow to the environmentalist fight in the region. The news came at a time when the country is still trying to recover from the loss of Berta Cáceres, the co-founder of COPINH who was murdered four months ago.

Authorities are investigating, and there was little mention at first of possible political motives behind Urquía’s murder. Soon after her death, however, it was revealed that an employee of one of the businesses behind a hydroelectric project, which Urquía had opposed, was suspected of involvement.

The controversies are numerous and the indignation is widespread. However, beyond the debates, Urquía’s killing has once again shed light on the grave danger that environmental and human rights activists face in Honduras.

The conflicts between indigenous organizations, the government and multinational companies are rooted in the use of land and rivers. Local populations complain these resources are often exploited without their consent. The Lenca Indigenous Movement of La Paz (Movimiento Indígena Lenca de la Paz, or MILPAH) is one of many groups that have reported that multinational organizations have illegally obtained environmental licenses without a prior, free consultation. That measure is stipulated in the Indigenous and Tribal Peoples Convention (known as ILO-convention 169), a binding international agreement signed by the government of Honduras.

The communities affected monitor development projects to make sure they don’t negatively impact their way of life and demand that they be involved in the decision-making so that residents derive some benefit. They’ve organized protests and blockades that hinder construction such as the hydroelectric project in La Paz to make their voices heard.

After Urquía’s murder, COPINH accused the Honduran government of having her blood on its hands and the military and police forces of being complicit. Likewise, COPINH said all governmental institutions are guilty of keeping activists under permanent threat in the interest of pushing through projects that affect the well-being of local communities.

‘Stop killing us for defending our rights’

The Honduran government is facing enormous pressure to do something about the impunity that has created a breeding ground for the country’s high number of murders. As the video shared by news channel Hondured 13 demonstrates, the attendance at Urquía’s funeral was high:

Environmental organizations like CENSAT Agua Viva (Living Water) called upon the government to stop the persecution of environmental activists like Cáceres and Urquía:

We repeat the demands of COPINH in search of justice so that the feminicides of Lesbia and Berta Cáceres don’t remain in impunity. We make an urgent call to the Honduran state asking that the pertinent investigations move forward in order to punish those responsible for these acts and in turn, that they allow an Independent Panel of Experts led by the Inter-American Commission of Human Rights to investigate the murder of Berta Cáceres.

We demand that the state of Honduras put an end to the persecution and violation of environmental activists’ human rights, expel and investigate with urgency the police and military force members involved in crimes against them, and implement all necessary measures to ensure the institutions comply with the obligation to protect them and to encourage their legal work of defense. 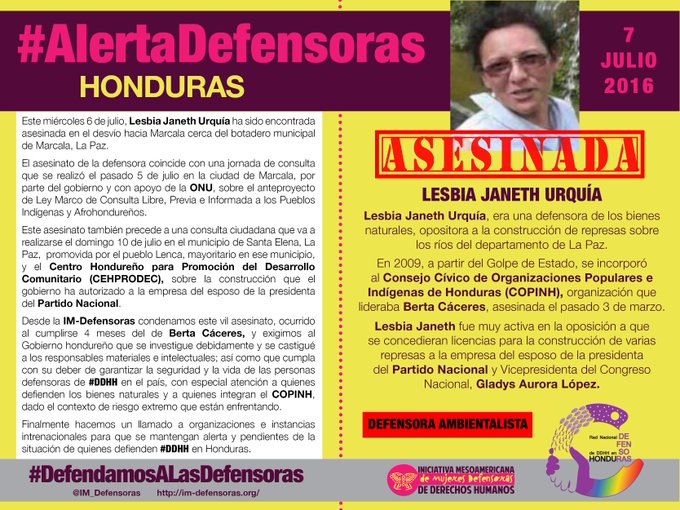 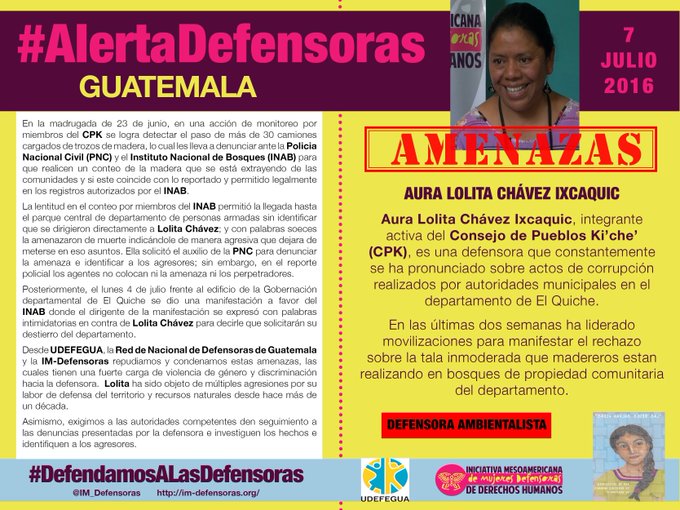 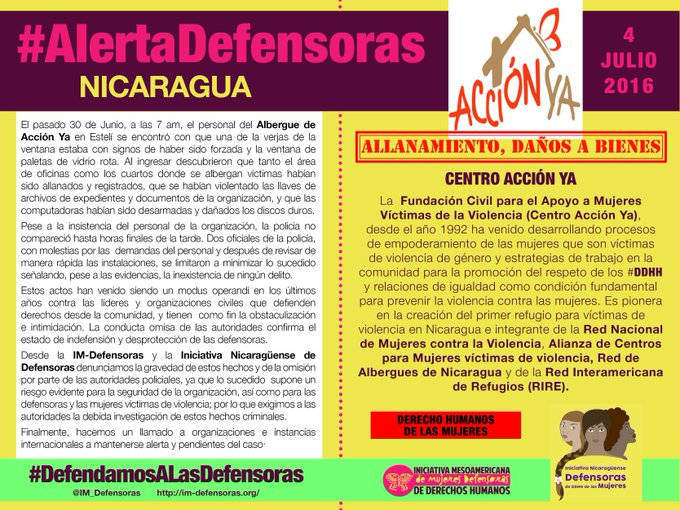 Image on the left: July 7, 2016. MURDERED. Lesbia Jameth Urquía. Lesbia Jameth Urquía was a defender of natural resources, opposed the construction of dams in the rivers of the La Paz department. In 2009, since the coup d’etat, she joined the COPINH, an organization led by Berta Cáceres, who was murdered on March 3. Lesbia Janeth was very active in her opposition to the granting of licenses for the construction of several dams to a company owned by the husband of Gladys Aurora López, the president of the National Party and vice president of the National Congress.

We demand that the Honduras government put an end to the murders of environmental activists. Stop killing us for defending our rights.

We ask that the international community stand behind the rights of the activists in our lawful exercise and in the particular case of Honduras, that the recent murders of Berta Cáceres and Lesbia Yaneth Urquáa be investigated and severely punished in order to end the impunity.

Throughout Latin America, environmental activists are targeted for persecution and violence in countries like Honduras where multinational corporations have allied with local political or economic powers, seeking to exploit natural resources.

According to Global Witness, Honduras is “the deadliest country in the world to defend the natural world,” and according to their report “On Dangerous Ground,” the numbers are soaring worldwide:

Land and environmental defenders are now being killed at a shocking rate of more than 3 a week. The majority of cases recorded were in Latin American and South-East Asian countries […]

In most cases, the murders remain unsolved. According to the organizations’ articleHow Many More:

Each week at least two people are being killed for taking a stand against environmental destruction. Some are shot by police during protests, others gunned down by hired assassins. As companies go in search of new land to exploit, increasingly people are paying the ultimate price for standing in their way.

We found that at least 116 environmental activists were murdered in 2014 – that’s almost double the number of journalists killed in the same period. A shocking 40% of victims were indigenous, with most people dying amid disputes over hydropower, mining and agri-business. Nearly three-quarters of the deaths we found information on were in Central and South America.

Globally, it’s likely that the true death toll is higher. Many of the murders we know about occurred in remote villages or deep within the jungle, where communities lack access to communications and the media. It’s likely many more killings are escaping public records.

The organization’s report “Terreno peligroso” (Dangerous Land) reported that there were 185 deaths of activists recorded in 2015 throughout the world — 60% more in comparison to 2014. Of these murders, 66% (122) occurred in Latin America.

Meanwhile, other organizations like the United Nations and the European Union and individuals on social media continue speaking out. Hondurans are left to wonder: When will these tragedies end?

Written by Lully and translated by Danelle Hood for Global Voices Online.
FacebookTweetPinLinkedInGoogle+